Steven Murray is an experienced attorney in employment and civil rights law, litigation, and trial practice.

Steven’s experience has been virtually exclusively devoted to practicing private and public-sector employment and labor law, including civil rights in the workplace.

He has represented prevailing individuals in multiple consecutive jury trials before the United States Court for the District of Colorado−achieving verdicts for employees, applicants, and former employees against the United States Government, private sector employers, and the City and County of Denver.

Steven has represented prevailing federal, state, and local government employees before the United States District Court for the District of Colorado, the Merit Systems Protection Board, the Foreign Service Grievance Board, the Equal Employment Opportunity Commission, and the Career Service Board for the City and County of Denver.

Before opening this practice, Steven Murray served as a Senior Trial Attorney with the Equal Employment Opportunity Commission in Denver and Birmingham, Alabama.

For four years, Steven practiced civil rights law in the Deep South as an attorney in the EEOC’s Birmingham District Office.

Before serving with the EEOC, Steven Murray practiced employment and civil rights law.

In Washington D.C., he worked for a law firm representing federal employees and as an attorney for a labor organization.

As a young attorney, Steven served as an attorney with two labor organizations - the International Brotherhood of Teamsters in Washington, D.C., and the Colorado Education Association in Denver.

Steven Murray is admitted to practice law in Colorado and the District of Columbia. 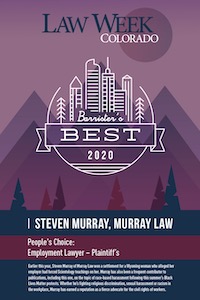 Client Reviews
★★★★★
"I found Steven at a very stressful time. He has been compassionate, timely, honest & an all around pleasure to work with. His knowledge of employment law is deep and effortless. I am so pleased he is in my corner advocating for me! Thank you, Steven!" Amanda
VIEW MORE
Submit a Law Firm Client Review